Even as a school of martial arts in Rancho Bernardo we offer way more than just our regular self defense classes. Our party services only require you to show up and add some decorations to match your party theme, allowing you to have a worry free day where you can sit and relax or even better, jump in on the fun yourself!

We offer a variety of different themed parties that have been voted best in San Diego, the first of which is our Kids Karate themed birthday party where our own expert martial arts instructors teach your kid the basics of being a ninja. From dodgeball to an exciting martial arts relay race, and even breaking boards, your party will be hopping around punching, kicking and having an absolute blast at your local martial arts school in Rancho Bernardo.

Have A Unique Party In 4S Ranch

The instructors can always pick games for the kids to play, but some of the most popular games are:

One of the best parts about our party services is you have our entire 5000 square foot martial arts Rancho Bernardo facility completely set up for you and your party beforehand. Not to mention it is supervised by our professional instructors for the hour and a half duration of your party, and the best part of all you have no need for a vacuum because we take care of all the cleaning for you!

While our parties may be kid focused, we make it easy on you by making sure that most hassles that come with a party are taken care of. We do prep, supervision, and clean-up with a ton of different themes all without leaving the 4s and RB area. With so much of the stress gone, you’ll find it hard not to enjoy yourself at a party handled by our kids karate in 4s ranch!

“We had our son’s 2nd Cobra Kai themed birthday here and everything was perfect. Special thanks to Will who went above and beyond – we are so very thankful! He had a jumper and slide set up for the kids. We had toddlers to teens attend the party and everyone had a blast. I highly recommend. We rented out the whole facility which includes a party room with 2 bathrooms. We had such a great time!”

“Not ever going to do a Chuck E Cheese Bday ever again !!!

We are so glad we found this place for our son’s 5th bday.  We have tried kid ventures, chuck e cheese, jump it up, etc…. We wanted to do something a bit different than the “let your kids run around for an hour, then cake time.”

My son is into Ninjago this year so he wanted a ninja themed bday party.  After endless research, we found West Coast on Google.  We were skeptical bc there weren’t many reviews on karate bday day parties. I decided to give the place a call and ended up setting a time to meet Will to go over the details of our party.  We met the same evening and after talking to will for 5 mins, we decided to book my son’s party, and this was the best decision ever.

This is a martial arts academy where they teach kids martial arts, duh The facility was awesome. It’s located in a business park in 4s Ranch/Rancho Bernardo. It has 2 rooms with AC where my wife was able to come a little bit early to setup the decorations and food. We booked the package where Will allows you to bring in your own food. Did I mention our party was in Sunday? We were so thankful that Will was able to accommodate us.

The best part of having a karate party had to be the karate activities that prepared by the instructor. The instructor for the day was Robert, he was so nice and patient with our little 5 yr olds that they listened to 99% of what he was saying. Activities included an obstacle course (kids favorite), lining up in rows to learn basic karate moves, and a relay. This place is big enough to accommodate big parties. We had 20 kids and 20 adults and it didn’t feel crowded at all.

A special thanks again to all the West Coast Team for making my son’s 5th bday party super spectacular.  We got kudos from other parents and they signed up to have their kid’s bday party here too. We were so impressed that we signed my son up for karate lessons. Karate has helped him learn to be calm and graceful, which is always a plus around the house.” 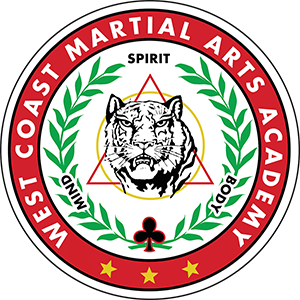